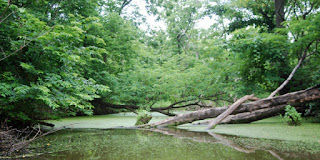 One of the most critically imperiled turtles to be found in North America is the Blanding’s Turtle (Emydoidea blandingii), named for William Blanding, a Philadelphia naturalist who first described it. They are found from Ontario, Canada; south to Iowa and back east as far as New York. There is a small population of about 300 found in Nova Scotia. The highest population densities are found in the Great Lakes region. They are listed as state endangered or a species of special concern in nearly every state they are found in. The biggest threat these turtles face is the loss of habitat due to agriculture and from major modifications to streams and rivers, such as dam building. Blanding’s turtles have very specific habitat requirements that include marshes, sloughs, ponds, lakes, streams, creeks, and vernal pools with shallow water, soft bottoms and large amounts of aquatic vegetation. 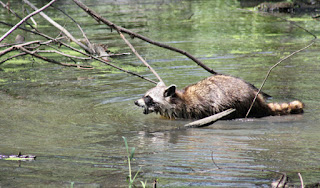 With the draining of these wetlands for agriculture and other human endeavors the turtle finds it harder and harder to survive. Added problems this turtle face are cars, predators such as raccoons, foxes, skunks, and even ants.
Then we must consider that this species reaches sexual maturity later than most turtles with females reaching sexual maturity between the ages of 14 to 20 years of age and males at about 12 years of age. With all these things combined we can begin to understand how this turtle has suffered such dramatic population declines.


Blanding’s turtles are semi-aquatic basking turtles that can be found either in their watery habitats or on land. Typically they will leave water when seeking new areas to inhabit or when looking for places to lay their eggs. In the water they are actually poor to average swimmers and will use the dense aquatic vegetation to support themselves as the move through the water. They are often found floating among the aquatic plants or basking on logs, muskrat mounds and other objects within the water.


Blanding’s turtles are medium to large turtles with a carapace length from 5 to 7 inches, although lengths up to 10 inches have been reported. Males are larger than females, but females have higher carapaces than males. These turtles are often mistaken for box turtles because of their high domed carapaces, and their hinged plastron. 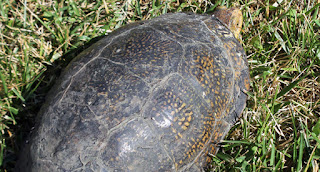 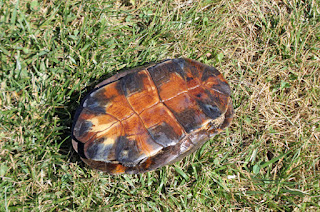 Their carapace is dark in color and may vary from dark gray to black with small light color spots or small lines in a highly variable pattern, although some specimens lack any markings at all. The plastron is yellow with dark blotches on each scute.

The most distinctive characteristic of this species is the yellow chin and neck. This feature makes identifying them easy as no other turtle in North America has this bright yellow neck and chin. They often look as if they are smiling, which in my opinion gives them an adorable, charming appearance.

This species also has an extremely long neck and are often referred to as long-neck turtles and are lumped in with another long-neck turtle called the Chicken Turtle which is also critically endangered in much of their range. Blanding’s turtles are the only species in the genus Emydoidea even though they share the same long-necked characteristic as the chicken turtle they are not particularly closely related. 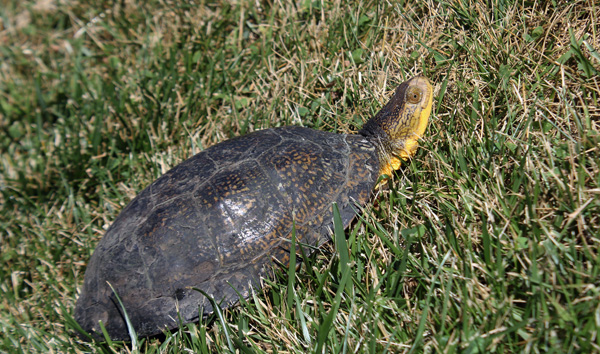 Mating takes place between April and June when males approach females. There is not much of a courtship to speak of; males typically push females to the bottom of their watery home. If the female tries to flee the male, he will chase her and grasp her shell with his claws. He will hold onto her carapace with the claws of all four feet and position himself so as to line up their cloacal openings. Mating will last approximately 15 to 30 minutes. Sometime between June and July the female will search for a suitable location on land to lay her eggs. She will dig a shallow, flask shaped hole and deposit 6 to 20 eggs. She may lay up to 2 or 3 clutches in a single season. The eggs incubate for up to 80 days.

The young will leave the nest and move towards the nearest water source. In some areas it has been reported (although rare) that they spend the entire winter in the nest and emerge the following spring. It can be assumed they have special adaptations within their blood that allows them to survive the freezing temperatures of winter. Many turtles, like painted turtles have blood that contains a chemical much like anti-freeze and will spend the winter encased in the underground nest.

The biggest threat to these turtle eggs is predators such as raccoons, and foxes. As many as 84% of the eggs laid by the Blanding’s turtles may fall victim to predation. Ants can also destroy a batch of newly laid eggs, as well small burrowing rodents like chipmunks. Once the eggs hatch they are still not out of danger from predation, as foxes, raccoons, skunks, opossums, and large birds like herons and crows all savor baby turtles. Females traveling on land often cross roadways to seek suitable nesting sites and are hit by careless drivers. This takes a devastating toll on the future success of this species. Even a loss of 1 to 2 percent of adult turtles can have long lasting impacts on future generations.

It is common for this species to live more than 50 years and there are reports of specimens exceeding 70 plus years. Their reproductive cycle does not slow down with age; in fact quite the opposite is true. The older, more mature females produce larger litters and are likely to mate more frequently. The ability of this turtle to live to a ripe old age and to continue to reproduce throughout its life may be the only saving grace for this species.

In Missouri where I live there are only a few populations in three counties reported in the entire state. One of those locations is Squaw Creek NWR in Holt County. In June a female was found crossing the roadway near one of the wetlands. It was captured, and had a transmitter secured to its shell. This is the first Blanding’s to be tagged in over 20 years on the refuge. This species is rarely encountered on the refuge, so this particular turtle caused much excitement among the refuge biologist, Darrin Welchert, and our local herpetologist Dr. Mills and the rest of us who were privy to the situation. 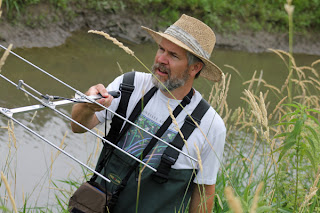 The next day after it was tagged it was found within 25 yards of where it was released. Two days after being released it was 300 yards away!!!

This illustrates this species ability to travel great distances. Skipping even one day of searching for this tagged turtle could result in losing it and the transmitter for good.
(Dr. Mills using transmitter to locate turtle)


Over the course of several weeks numerous trips were made to the refuge to locate the turtle. It was found within a 300 yard radius of its original release location each time. Several weeks ago, Dr. Mills picked up the signal of the turtle and discovered that the transmitter had somehow fallen off the shell. To say everyone was disappointed would be an understatement as much knowledge stood to be gained about this species and their habits on the refuge by following the day to day activities of this single turtle. Hopefully next spring will yield an additional turtle and barring any problems we will be able to start the study anew.


The diet of the Blanding’s is varied and includes crawdads, fish, frogs, tadpoles, leeches, insects and some aquatic vegetation. In most of the range crawdads seems to make up the bulk of their diet. 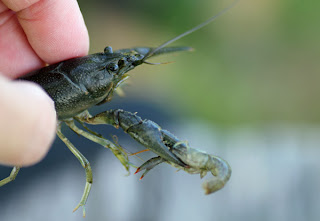 Blanding’s, like all turtles that occur in colder climates hibernate during the winter and will submerge themselves in the water and lay dormant on the bottom in the mud and silt. Their heart rate slows down and their bodies become inactive as they wait out the cold weather. However they seem to tolerate cold weather better than many water turtles and have often been found swimming below the ice along the shoreline of their watery homes. In Missouri they may become active again with the first thaw as early as March. Further north it may be the end of April before they begin showing signs of activity. During the hottest days of summer they typically stop feeding and once again go dormant in a form of summer-time hibernation known as aestivation. This heat induced inactivity may last a month or more, but will usually end when cooler temperatures return in the early fall. They will start eating again to put on fat reserves that will see them through their long winter hibernation.


Much consideration should be given before land development takes place in areas where known populations of these turtles are located. Some areas have had success with artificial habitats in helping secure areas for this turtle to reproduce and live. As nearly all states provide some sort of protection for this species, anyone planning to alter these habitats should be made responsible for creating alternate areas for these turtles to live. 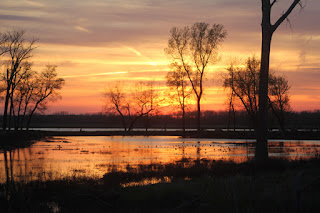 We all need to appreciate the beauty of these natural areas and recognize that wildlife depend on these wild lands for survival. It would be sad indeed to lose something so unique and beautiful because of greed or lack of knowledge.

This group is primarily dedicated to getting restrictions placed on rattlesnake roundups in order to ensure sustainable populations. We, as conservationists, understand that a realistic balance between biologists and the public needs to be met so that the communities dependent upon these events will not be left economically unstable. We also promote the significance and humane treatment of all herpetofauna.

WE ARE NOT AN EXTREMIST GROUP. WE WILL APPROACH GROUPS IN CHARGE OF SNAKE HUNTS WITH RESPECT IN ORDER TO GET RESPECT. WE USE SCIENTIFIC PUBLICATIONS AS THE BASE OF OUR ARGUMENTS, NOT UNCONTROLLED EMOTIONS.

We endorse the position of The American Society of Ichthyologists and Herpetologists. 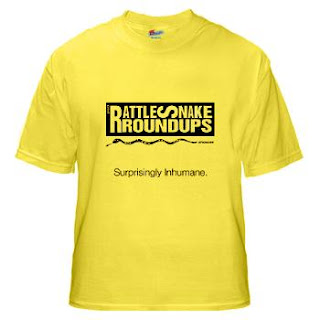 Show your support for Rattlesnake Round-up reform by ordering your very own awesome t-shirt today. 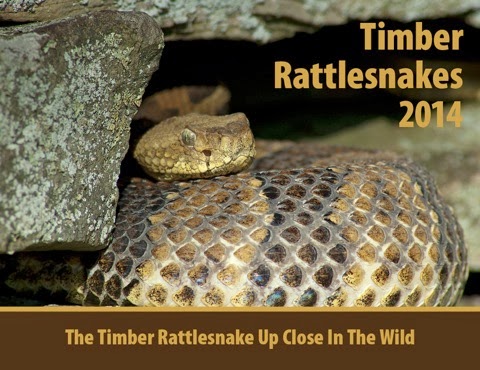 Need a unique gift for the snake lover in your life? Why not a beautiful full color calendar featuring the Timber Rattlesnake? Also available is a 20 minute DVD featuring Timber rattlesnakes in the wild.

A magazine for all the herp lovers out there. Full color issues full of photos and valuable information.

Subscribe to a full year (6 issues) of Herpetoculture House eZine & get our annual free! Below is our inaugural year in review which is available now!

Return of the Giant Killed Rattlesnake 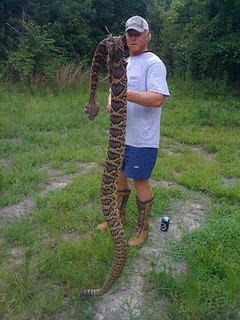 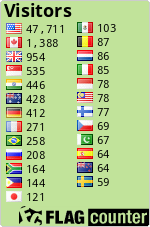 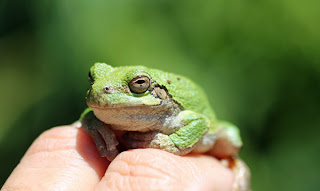